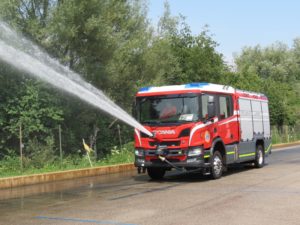 A few months ago, fire departments of the U.S. Army in Germany started operating eight new Scania fire trucks (structural pumpers) equipped with Rosenbauer-body and Allison 4000 Series™ fully automatic transmission. The U.S. Army has opted for this vehicle configuration for some years now due to its advantages in terms of training, deployment and maintenance.

The U.S. Army in Germany recently added eight vehicles to their fire truck fleet comprising of Scania structural pumpers P410 B4x4HZ with the new CP 31 Crew Cab. The vehicles are powered by a 302 kW (410 hp) diesel engine combined with an Allison 4000 Series™ fully automatic transmission. The vehicles will be stationed at different locations across Germany.

The U.S. Army has been procuring this vehicle configuration for 10 years now. This is partly because of the advantages provided by a standardized operational fleet in terms of staff training and vehicle maintenance, but also due to the positive experience with Allison transmissions over the past three decades.

“So far, the transmissions have fulfilled all requirements of the U.S. Army with regards to performance, operation and maintenance,” said Sigurd Mack, Fire Protection Specialist at the U.S. Army Installation Management Command’s European Headquarters in Sembach near Kaiserslautern. “This also applies to the integrated hydraulic retarder and the Power Take-Off with the pump and roll function. It enables us to maneuver the vehicle safely and, at the same time, operate the water pump via the Power Take-Off – which is indispensable for efficient firefighting. For our operations and emergency responses good acceleration, easy handling and robustness are essential.”

The fully automatic Allison transmission with its patented torque converter and Continuous Power Technology™ multiplies engine torque during vehicle start-up and acceleration. Gear changes are made without interruption, resulting in the smooth transfer of power to the drive wheels and maximum efficiency between engine and transmission.

“The transmissions shift smoothly at precisely the right moment, allowing the driver to concentrate fully on the road, which contributes significantly to accident prevention,” said Mack.

“In addition, to have competent and highly skilled service technicians, as well as spare parts service locally available greatly limits down time and contributes to our readiness,” said Mack. “The transmission manufacturer infrastructure has also supported our goals so far in this regard.”

Allison fully automatic transmissions have demonstrated their outstanding reliability and durability under extremely difficult conditions, and are consequently used by numerous fire brigade fleets worldwide. There are currently about 70 Allison fully automated vehicles in the fire truck fleet of the U.S. Army in Germany.

The oldest Allison transmissions in the fire brigade of the U.S. Army in Germany have clocked up over 30 years of service. In 2007, the drivetrain components from twelve older Amertek 2500L trucks were removed and installed into twelve overhauled firefighting trucks, so called “glider kits.” The Detroit diesel engines and the Allison HT 750 DRD transmissions of the Amertek 2500L trucks, which at that time were already around 25 years old, were fitted to a new HME 1871 SFO chassis with a body made by Hensel.

“In the USA, general vehicle overhaul is a recognized procedure for vehicle maintenance and service life extension. The engines and transmissions, especially in fire trucks, are still in relatively good working condition and have proven to be very reliable, even after a long period of time. This contributed to the decision for a service life extension,” said Mack.

Compared to a new purchase, the “glider kits” helped to save approx. 80,000 – 100,000 USD per vehicle without compromising the functionality. The “glider kits” are used as multi-purpose vehicles for firefighting and for providing technical assistance.

About Allison Transmission
Allison Transmission (NYSE: ALSN) is the world’s largest manufacturer of fully automatic transmissions for medium- and heavy-duty commercial vehicles and medium- and heavy-tactical U.S. defense vehicles, as well as a supplier of commercial vehicle propulsion solutions, including electric hybrid and fully electric propulsion systems. Allison products are used in a wide variety of applications, including on-highway trucks (distribution, refuse, construction, fire and emergency), buses (school, transit and coach), motorhomes, off-highway vehicles and equipment (energy, mining and construction applications) and defense vehicles (wheeled and tracked). Founded in 1915, the company is headquartered in Indianapolis, Indiana, USA. With a market presence in more than 80 countries, Allison has regional headquarters in the Netherlands, China and Brazil with manufacturing facilities in the U.S., Hungary and India. Allison also has approximately 1,500 independent distributor and dealer locations worldwide. For more information, visit allisontransmission.com.

About U.S. Army fire brigades in Germany
The U.S. Army independently provides preventive fire protection for their sites. Presently, the U.S. Army operates fire brigades at seven garrisons, some of which have several fire stations. Protective objectives are defined in the NFPA and the corresponding implementation regulations of the U.S. Department of Defense. Although the standards of the American and German fire brigades differ, they work together closely supporting each other well. On the one hand the equipment is specially designed for this cooperation, on the other hand all firefighters of the U.S. Army are German employees and have already completed a basic German firefighter training prior to their training according to U.S. standards. There is a specific U.S. Army Firefighting Training Centre in Ansbach, Bavaria, for training and certification according to U.S. standards. Further information about the U.S. Army in Europe is available at: http://www.eur.army.mil/